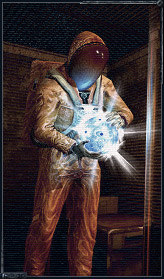 I used to see him now and then in the research camp when I came with a loot to sell. He looked a normal buddy. Big and robust, you’d never think him one of the eggheads. He gave me good price on artefacts, was always happy to chat about this and that... and what a stupid end. He was fussing with his gear right near the ‘Whirligig’ when these rascals started to shoot. He got thrown into the anomaly, then twisted. When we finished the combat, there was left nothing but shreds of his overalls at the ‘whirligig’.

Researches of the Zone nature and the nature of its bearings. Under their favourable attitude a lucky stalker can profitably sell the Zone loot to scientists without the dealer’s mediating.