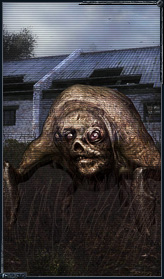 Like many other living creatures, domestic pigs in the Zone underwent serious mutation, which affected genes responsible for their metabolism causing the animal's phenotype to change significantly.

A mutant pig of this type, know as "flesh" among stalkers, is one of the clearest examples of the Zone's perversion of nature. The pigs have developed a protective layer of scales and bones, their regeneration potential grew significantly and their nervous system became more complex.

Just like a normal pig, "flesh" is an omnivore and may attack a stalker if hungry.