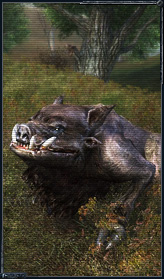 A large animal that can reach 1.5 meters at the shoulder. The boar's ability to survive and aggression surpass that of its relatives outside the Zone and resemble that of most mutants.

Mutagenic processes engendered by radiation and anomalies have played a significant part in shaping these mammals: they have lost all fur in places and grown long, bristly fur in others. The animals' hooves have changed in shape and become sharper, acquiring a resemblance to claws; their pupils have become colorless and pigmentation disorders and deep wrinkles have appeared on their bald heads.

Zone boars resist radiation well which allows them to spend long periods in heavily contaminated areas. They normally attack by charging at their victims and attempting to rip them to shreds with their claws or knock them over.