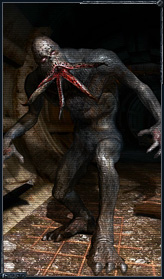 This semi-legendary monster is described by experienced stalkers as a tall, hunched humanoid with a mess of tentacles instead of a mouth. According to these stalkers, the creature uses the tentacles to feed by clinging to the victim's throat, paralysing him and sucking him dry of blood, leaving only a dry, mummy-like shell in place of what was a living human only seconds earlier. The most astounding feature of the bloodsucker is its ability to become invisible.

It seems that these creatures are responsible for the deaths of a large number of stalkers. Few of those who have seen one were lucky enough to survive the encounter and according to them bloodsuckers prefer damp places around marshes and subterranean areas.