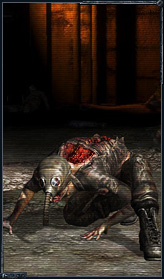 It appears that these creatures were at one point humans, however it is difficult to imagine the conditions that could turn a human being into this disgusting animal.

Snorks are crazy creatures that lead an animal life and differ little from other carnivorous monsters in the Zone. They move on four legs, jumping along and constantly sniffing the ground in hope of picking up the scent of their prey. They hunt carefully and in a calculated manner, ambushing stalkers like wild animals. Their sharp reflexes and powerful muscles allow snorks to make accurate long jumps and tear their victims to shreds in a matter of seconds.

Parts of army uniforms and other clothing are sometimes found on their bodies making it reasonable to suggest that they are what became of missing military stalkers.