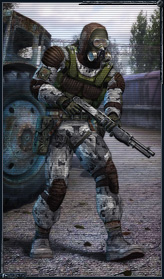 This group is most like a religious sect. Its members believe in existence of an evolutionary alien crystal, the Monolith, in the Zone's centre.

Most stalkers treat Monolith adepts with contempt, and consider them lunatics. From its inception the group has attempted to block progress towards the Zone's centre, fearing that stalkers have ill intentions regarding the Monolith.

Rumours say that the group has a large base near the centre of the Zone, but its exact location is known only to its members.

"Monolith" members have been weirdoes even before they completely lost their marbles. They all kept telling tales of aliens, the uniqueness of the Zone, alien experiments, and, of course, their cherished Monolith.

Some even believed them, despite lack of any live witnesses. Of course, there were plenty of windbags claiming to have personally seen the Monolith. Of course, who is going to believe Sanya the Red or Talker, who have not even made it to the Agroprom on their own?

And now the Monolith members have totally lost it. They have even stopped talking to anyone at all. They simply start shooting at anyone they see. One word – fanatics.