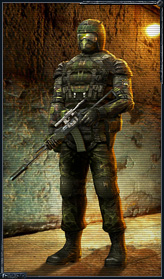 Soldiers who took special training after service in the Zone, or stalkers contracted by the army.

They carry special equipment, are well armed and equipped. Most often they are used to study the causes and consequences of the disaster, and also map the Zone.

They may move alone or in groups of up to five people. They do not let regular stalkers approach, immediately opening fire.

Cornet walked and felt the heavy gaze of Melehov on the back of his head. Even though the mayor told him that Cornet was one of their own, the military stalkers, he still did not trust him.

Or, maybe they met before, back when Cornet was free in the Zone? The stalker even glanced back, once again seeing the lieutenant's face. No, probably did not meet.